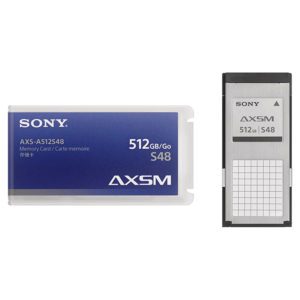 The Sony AXS 512S48 is a memory card designed for the Sony Venice camera. This is the latest most advanced memory card on the market, it is the most sturdy and reliable offering from Sony to date. Cards are rented separately when renting the Sony AXS-R5 RAW recording system.

Here are some of its highlighting features:

The 512GB storage capacity makes the AXS 512S48 ideal to be used for large projects. As we mentioned above, it’s specifically designed for the Sony Venice camera and the AXS-R5 RAW recoding system and integrates seamlessly with the overall system.

You would have no problem using it with the AXSCR1 USB-3 Card Reader, as it’s custom-designed to be used with it.

When it comes to highly demanding digital cinematography projects involving linear 4K and 2K recording –and a very high frame-rate to ensure the best quality results – it’s hard to find something better than the Sony AXS 512S48.

This is thanks to its high-capacity flash memory media, with its ability to write at an impressive speed of over 2.4 Gbps.

What’s more impressive is that the high speed doesn’t come with a compromise on the security or reliability. You can expect rock-solid reliability from it when working on any type of digital cinematography project.

Similarly, its data security is perhaps of the highest standard you can find for a system similar to the AXS-R5 RAW recording system.

The memory card itself is made using high-quality steel and plastic, and apparently wouldn’t have any problem withstanding rough use and standing the test of time.

Finally, while it’s not that you can’t find a better writing speed, the reliability can often be a hit or a miss with other faster memory cards.

Perhaps the only thing you may find disappointing about the Sony AXS 512S48 memory card is its hefty retail price. But that’s where we come in, with our highly affordable rental rates.

As mentioned above, the AXS 512S48, is a fast and stable memory card, highly advanced, So call us today to rent the Sony AXS 512S48 memory card for as long as you want for a fraction of its retail price.